Unraveling the mystery behind a star athlete’s painful injury 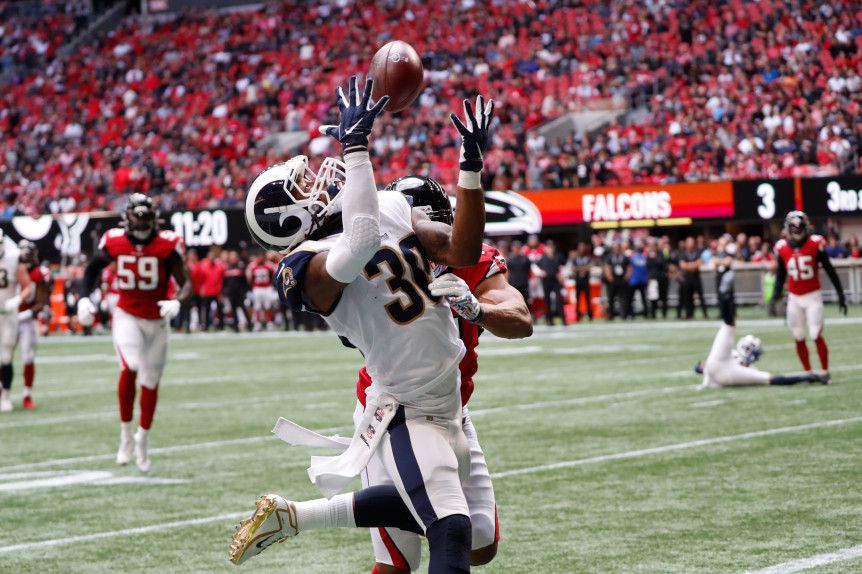 Todd Gurley ran for 41 yards on 18 carries and turned his only target into a 13-yard receiving touchdown during Sunday's 37-10 win against the Falcons.The 25-year-old back has been held under 4.0 yards per carry in five straight games, but he's still been productive by logging 14 receptions and six total touchdowns since Week 2. Rookie Darrell Henderson garnered seven second-half carries with the Los Angeles Rams holding a multi-possession lead throughout the third and fourth quarters, but Gurley appeared healthy enough to command an even greater workload than he did, coming off a quadriceps injury that kept him out against the 49ers in Week 6. Upcoming is a matchup against a Bengals defense that entered the weekend ranking among the NFL's six worst units in carries, rushing yards, rushing touchdowns, receptions, receiving yards and receiving touchdowns allowed to opposing running backs.

Knees don’t normally make big headlines—unless you’re Todd Gurley. Since tearing his left ACL while playing for the University of Georgia, the Los Angeles Rams running back has been haunted by injuries and rumors.

A torn or sprained anterior cruciate ligament (ACL) often occurs when playing sports like soccer, basketball, and football—activities that require sudden stops or changes in direction, jumping, and landing.  Chances are Gurley felt or heard some “knee popping” as well as experienced swelling and significant amounts of pain...all symptoms of a torn ACL. 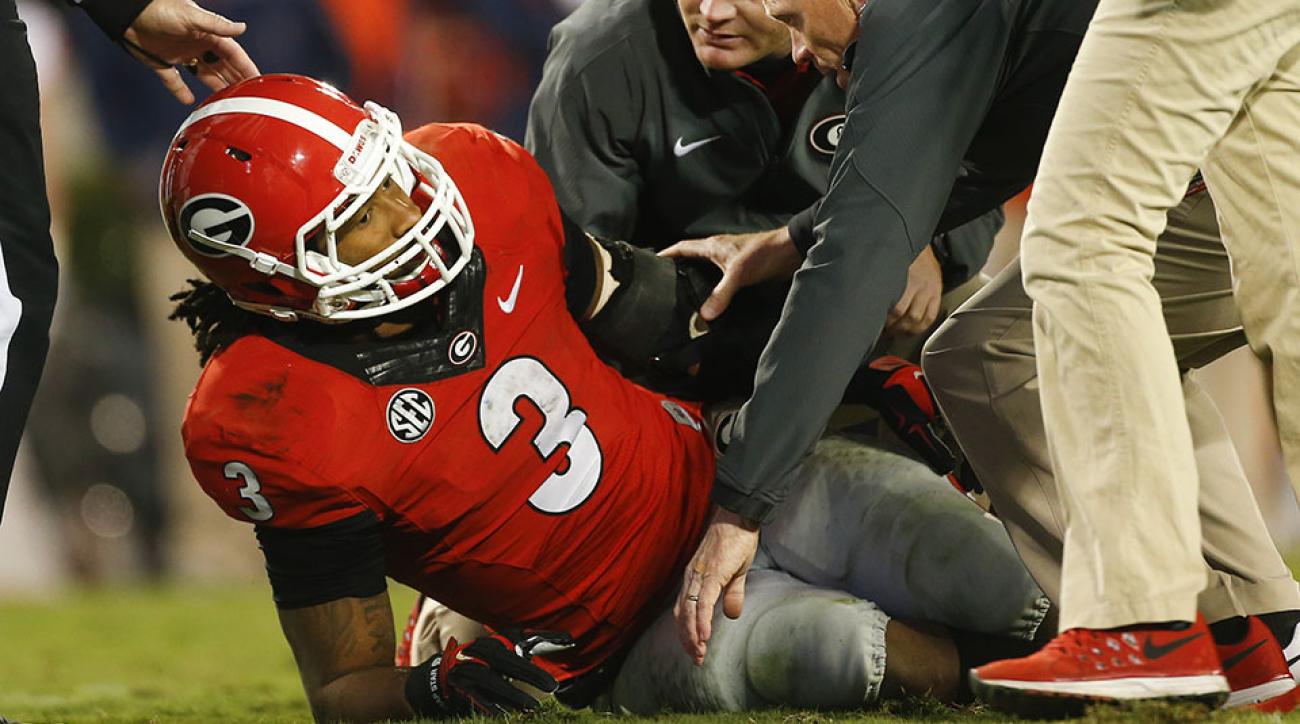 Gurley tears his ACL during a Georgia-Auburn game

Gurley had an outstanding first two years as a running back for the Georgia Bulldogs. He became only the second true freshman in Georgia to rush for 1,000 yards and was named First-Team All-SEC by the Associated Press. As a sophomore, he was named Second-Team All-SEC.

Bad luck hit Gurley hard as a junior. After a four-game suspension for violating NCAA rules, he returned to play against Auburn in November 2014. He tore his ACL, which ended his season. He had surgery and rehab, but chose to go pro instead of returning to Georgia for his senior year.

On to the Pros

Gurley was drafted by the then-St. Louis Rams in 2015. (The team moved to Los Angeles in 2016.) In a game against the Philadelphia Eagles in December 2018, Gurley sat out for part of the time due to a knee injury. He also sat out the last two regular season games and was also limited during the Rams’ postseason run.

His performance suffered during the NFC championship game; he only carried the ball four times for 10 yards. To protect Gurley’s injured knee and still maximize the offense’s effectiveness during the Super Bowl, Rams head coach Sean McVay used play-action passing as a decoy strategy. As a result, Gurley had 10 carries for only 35 yards.

After all this, it’s easy to see why his knee is getting the most attention during the on-ramp to training camp. He didn’t do any on-field work during organized team activities (OTAs) and wasn’t out there for minicamp in June. After working out, however, he still met with the media and reassured everyone his knee is fine.

“I’m fine, I’m training, I’m doing what I’m doing in the offseason—what I’ve always done up to this point, so it’s just part of getting ready for training camp and the season,” Gurley said. 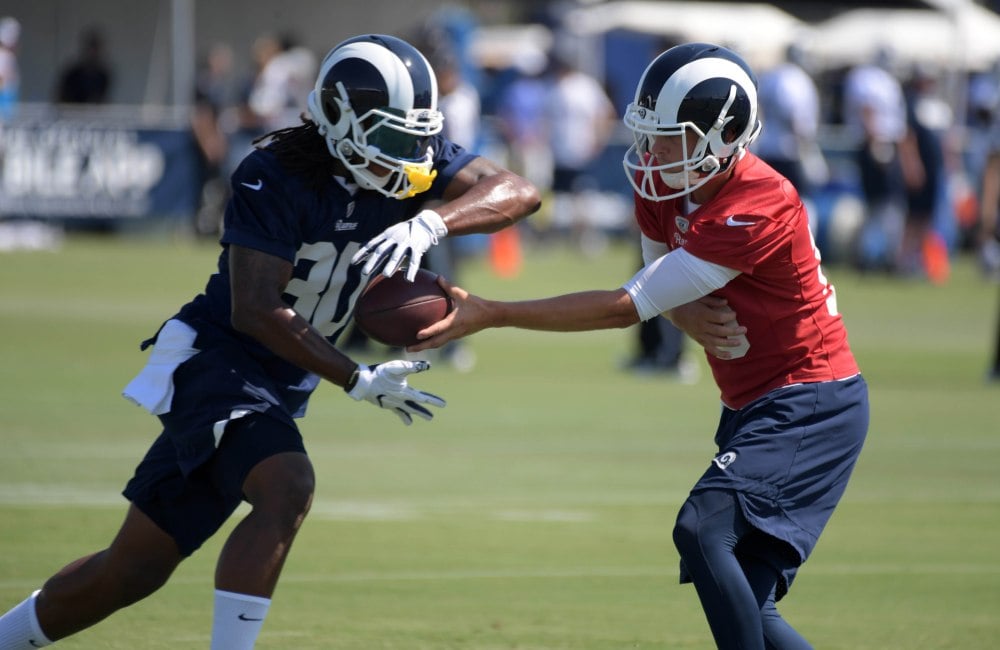 Gurley during an offseason practice

Gurley put to rest any notion that he’s changed his offseason training regimen amid rumors of weight loss and a new training team. He addressed this question at the presser, in regards to his OTA absence and reports of altered workouts, “No, just the same workouts, whatever my trainer tells me to do.”

In fact, he said that his current knee problem is “small” compared to what he had “coming out of college.”

Regarding the upcoming 2019 season, According to NFL Network’s Steve Wyche, NFL trainer Travelle Gaines as saying, “Now is there anything medical that the Rams or anyone is worrying about what's going to diminish Todd Gurley? Absolutely not.”

Gurley is reportedly doing plenty of strength, conditioning, and agility work, but is avoiding heavy plyometric drills such as running hills, box jumps, or doing work in the sand dunes of southern California. He is also reportedly decreasing his weight to play closer to 218 pounds—last season he played near or at 225. Sources say that by lessening his load, Gurley can improve agility and be “a little more dangerous in the passing game.”

We wish Todd Gurley well as he enters the 2019 season. For the rest of us who love to  play sports, hike, garden, or otherwise stay fit, we should also take care to keep our knees happy and healthy. 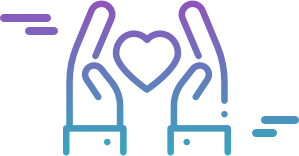