The 49ers start off the 2019 campaign undefeated 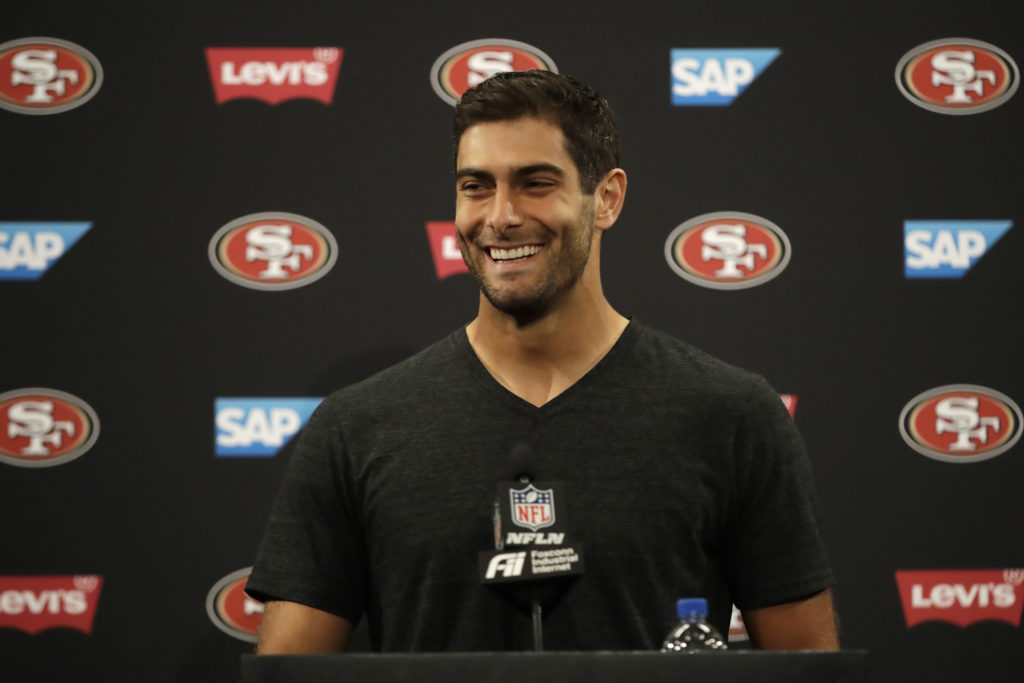 Reporter: "In a lot of these games, you are not being discussed. It’s the defense, it’s the running game, it’s both those things. I assume you’re OK with this?"

We are beginning to be in awe of the undefeated 49ers and their comeback of the year candidate and leader Jimmy Garoppolo.

When asked about the timing with motion and backs this week Garoppolo stated, “Yeah, I mean, it’s all about timing with the snap and all that and getting guys in good positions and the receivers have to be in their little details with all that stuff, but we’ve got a good group of guys for that.”

How is Your Chemistry with Your Safety Valve?

At this weeks presser Jimmy commented on one of the most important components a young QB and in this case a recent rehabilitating QB needs a reliable tight end. Reporter; You and TE George Kittle are, I think, 15-15 on third down connections this year. What is it that works so well with that combination on third down?

“Trust is a big part of it. It is. Just trusting that he’s going to be in the right spot, him trusting me that I’m going to throw the right ball on time and just, yeah, there’s so many reps and plays that go into that, that over the course of time it just equals good results.”

How Are You Adjusting After Injury?

Reporter, “Is there an element of picking up where you left off? You missed a chunk of time obviously from last season.” His rehab with trainers and physical therapists was obviously very important. Garoppolo states, “I don’t think it was anything specific. I think it was just hard work, putting in the reps in the offseason, training camp, OTAs, whatever it is. I think all those just add up over time.”

Jimmy Garoppolo returns this week vs the Arizona Cardinals. This will be his first regular season snaps since nearly a year after tearing his ACL in Week 3 running the ball against the Kansas City Chiefs. The San Francisco 49ers quarterback will finally get to let fly, here is what to watch for.

As a physical therapist and former quarterback/quarterbacks coach, here are the areas what I would determine are the markers of success for Goroppolo’s first season under center since surgery. 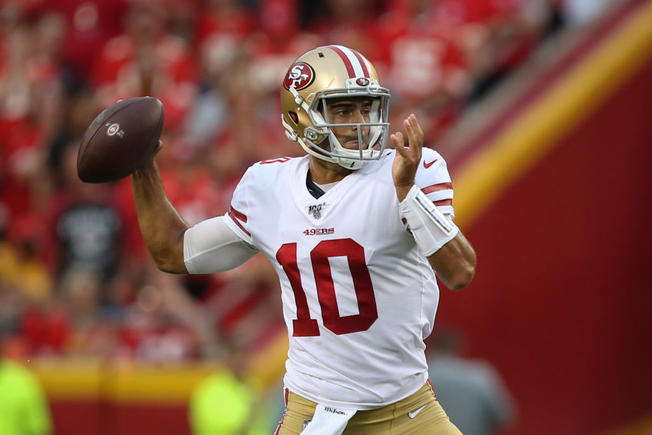 1. Does the ball come out on time?

Are his reads clean, footwork polished, and delivery of the ball without hesitation?

Many times after an ACL a quarterback gets tentative in the pocket as things crumble around them and they let their attention go to the bodies falling and flailing around them and their knees rather than looking down field. Watch for him to quickly escape the pocket as there may be uncertainty. If you watched Tom Brady after his ACL years ago he is one of the few that could ignore the chaos around him and continue to read defenses very early in his recovery.

2. What are the preferred passes?

Watch for quick routes, a heavy dose of the run, and dump off passes early to get confidence and try to get timing back into his game. As Niner fans get further into the game are any throws down field off a 5 or 7 step drop? This will determine his confidence growing.

3. What is the flight of the ball doing?

The trajectory of the ball is everything in the NFL and the margins for error are razor thin. If his ball is floating or drifting on short to intermediate routes it many times indicates the hesitancy to plant his feet and get into a good throwing slot. This is commonly seen in an attempt to get the ball out early and/or an incomplete followthrough in the throwing motion.

A great day for Niner-nation may not involve gaudy fantasy stats or even a victory vs the Buccaneers. From a QB perspective it would be; 1. A high completion percentage 2. Delivering the ball in the pocket on time 3. Taking a sack 4. When running sliding comfortably 5. Can he get to a 3rd receiver in a progression?

We continue to enjoy watching the comeback of Jimmy Garoppolo in the 2019 season. For the rest of us who love to  play sports, hike, garden, or otherwise stay fit, we should also take care to keep our knees happy and healthy.

Physical Therapy and the Importance of Home Exercises