The early injury updates were from an emotional general manager Bob Meyers as he shared, “It's an Achilles injury...he'll have an MRI tomorrow." A ruptured Achilles would not only end next season for Durant — it would also alter the landscape of the NBA.

When you see non-weight bearing and a walking boot, it can only confirm a full fledged achilles tear. 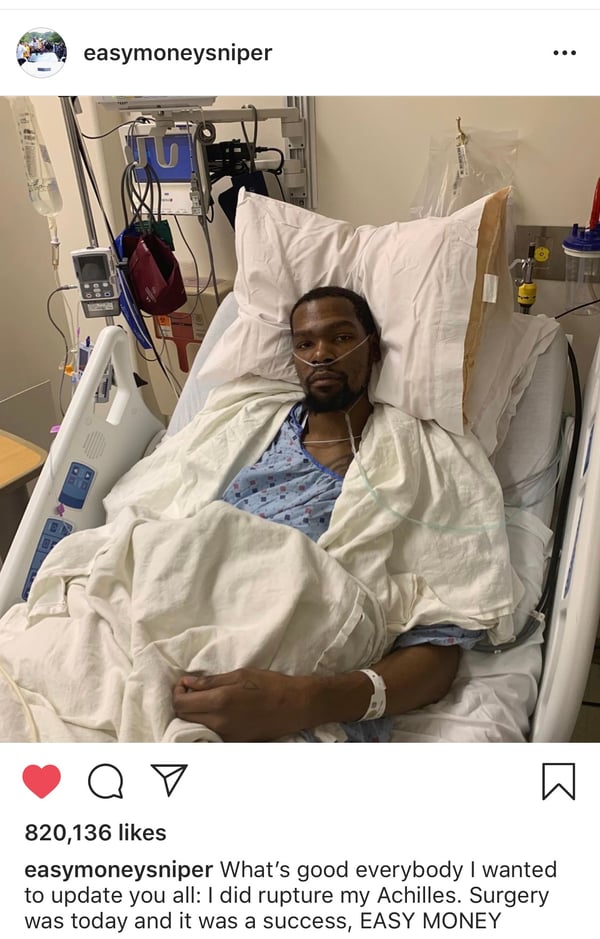 The 30-year-old star attempted to drive to the basket with a little more than 9:45 to play in the first half of Game 5. Durant fell to the hardwood, grabbed his leg, and was helped off the court by trainers. He was visibly upset, but almost accepting of his fate.

Durant then went to the locker room and was joined by training staff and teammates Stephen Curry and Andre Iguodala. Prior to the injury, Durant had a hot hand; scoring 11 points to help the Bay Area team get to a comfortable first half lead. The game ended in a nail biting finish with multiple lead changes. The thoughts of their fallen Finals MVP in the locker room weighed heavy on the Warrior staff and players in all post game interviews.

Now the second guessing begins. What was the extent of the tear from the earlier series with the Houston Rockets? We had talked about this in an earlier Luna Blog. At what percentage tear would it be appropriate to return to the highest level of activity? Meaning was it a 15% tear? Was the tear longitudinal or full thickness? Was it going up the achilles or across it? There is not an overwhelming opinion from the orthopedists and podiatrists I spoke with, but needless to say if it was nearly a full thickness tear it could ruptured any time in even the most mundane activities.

The more perplexing issue entangled in this is the pending free agency of Durant as he is set to seek a “Super Max” deal which would guarantee him 5 years and over $200 million dollars. What happens to this deal now? Does it change the potential suitors knowing that his rehab even on the most rosy of timelines is 8-12 months? This is even without any setbacks.

Anecdotally, professional athletes that I have had the pleasure to work with take nearly 12-16 months to get their vertical leap back and many only reach 85% of that. It terms of Durant, this will be less devastating than Gordon Hayward or John Wall, both who have suffered these injuries over the past 24 months. Durant has the dimensions of a 7 footer and has an excellent shot. While his leaping, defense, and fast break capability may be limited, he will still be a strong presence in the post and from the perimeter. He would then thrive on a team where he does not have to always create his own shot. Does this team sound familiar? Maybe the Warriors are the best fit on a 2 year deal?

Only time will tell, but this year's NBA Finals are still exciting on and off the court.

Are you a PT? Help patients recover in the comfort of their home.