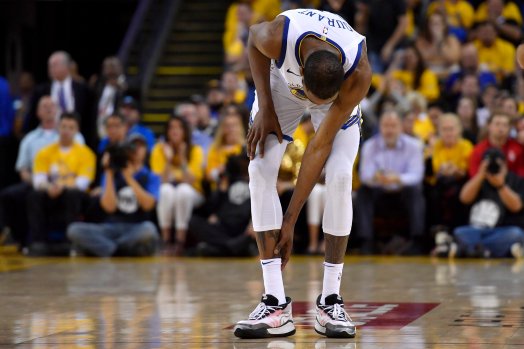 As a physical therapist, I am curious to the ongoing treatment and subsequent availability of Warriors' superstar Kevin Durant. Durant appears to have had a mundane landing, outside the paint in game 5 of the Western Conference Semifinals with the Houston Rockets. This has become increasingly more concerning in his continued absence. Durant was not cleared or ready to participate in the quick sweep of the Western Conference Finals against the Portland Trailblazers. Now the question turns to whether he will be available in the finals at all.

The Warriors proved to be susceptible to half court offense issues against the Toronto Raptors in game one at the Scotiabank Arena. The Warriors fell 118-109. The Raptors appeared more energetic and long. The game statistically played out this way as well with the Raptors playing great defense and forcing Steph Curry into difficult defensive assignments. The depth of the Warriors bench will continue to be tested while Kevin Durant is in street clothes. Since Durant’s absence, head coach Steve Kerr has leaned more heavily on Andre Iguodala, Kevon Looney, and Shaun Livingston.

Regardless of whether you feel the Warriors have better ball movement without the future hall of famer, Kevin Durant, it is still curious what the injury means. The training staff is likely being increasingly careful after achilles injuries to more prominent John Wall, Demarcus Cousins, Gordon Hayward, and Richard Sherman. Per reports, the injury were full thickness achilles tears after first having grade II-III sprains.

What is curious is how much either the training staff or the Durant camp will push him to return due to a pending free agency, which many rumors amongst reporters and odd makers have Kevin heading to the New York Knicks. Jayson Williams on the Dan Patrick Show joked Friday morning that “it would be up to Knicks doctors to clear Durant for the Finals.”

The Warriors training staff and therapists are feverishly working to keep both Andre Iguodala in one piece and Demarucs “Boogey” Cousins quadriceps healthy. While juggling those pieces, they are also tasked with the important rehab of Durant. For the Warriors, legacy is on the line. Four championships in five years would let the Bay Area team begin to enter discussions of all time dynasties and sports writers lists. The Vegas odds tilt the Warriors direction if Durant returns in Game 2 or 3. If Durant returns later then that is it too late? What will his mobility be? After over a month off will his game playing fitness be too challenged? There are many more fascinating PT questions yet to unfold.

This entry was posted in Luna Blog.

How to Find The Right Physical Therapist For You

Luna PTs Love to Save Time With Auto-Charting